Activity of teaching in a private school in Phnom Penh. Photo: Hong Minea

ICT (information and communications technology – or technologies) is an umbrella term that includes any communication device or application, encompassing: radio, television, cellular phones, computer and network hardware and software, satellite systems, as well as the various services and applications associated with them, such as videoconferencing and distance learning (http://searchcio.techtarget.com).

Around 20 percent of schools in Cambodia are facing shortage of toilet and clean water, said Hang Choun Naron, the Minister of Education, Youth and Sports last year . Yet, ICT is also in need as part of Cambodia’s Education Reform, due to its rapid growth in other ASEAN countries as well as the great demand in region’s labor market.

Cambodia has her national policy for ICT development, including ICT policies and strategies for Cambodian education system have been in place since 2004, and Cambodia’s Master plan for ICT 2014-2020.

ICT development also appears as a priority area in the Government´s Rectangle Strategy II. In 2012, after training of trainers and teachers, the Education Ministry announced the launch of an ICT program in the existing curriculum for students in grade 11 and 12. This program was scheduled to cover at least 2 hours of the allocated learning time.

Although all these mentioned documents the papers did not clearly defined ICT constitutes, yet they mentioned how important it was for Cambodia, and outlined how it would be used. 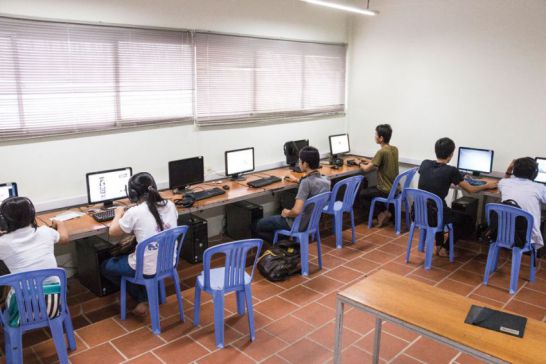 Students are practicing computers in a classroom. Photo: Leang Phanara

Unfortunately, the speed of the internet is slow and computers are still old and out-of-date. Accompanying these sad facts; many of the public schools cannot afford air-conditioner in computer laboratory.

Thus, the government should allocate more financial resources for ICT to respond to ICT policies and strategies as well as to meet the need in higher education and the demand in labor market. In the meantime, the public institutions are also in need for experts in the field. Even the Prime Minister Hun Sen has recently urged using digital and electronic system in administration and public services, putting emphasis on Cambodia as a country moving towards an e-government.

Every year, ICT teachers and experts organize an annual event known as Bar Camp, in which they present and share their knowledge to the public on ICT development.

As an example here, the USAID-funded School Dropout Prevention Pilot (SDPP) Program is a five-year applied research program aimed to reduce the number of dropouts from lower secondary schools in Cambodia. Working with local partner Kampuchean Action for Primary Education (KAPE), the SDPP Program helped reduce dropouts among lower secondary students from 215 schools in 6 provinces. Between 2012 and 2014, nearly 60,000 children benefited from the program, which helped reduce the dropout rate by 2.5 percentage points by integrating computer labs as one of the program priorities.

Furthermore, the Cambodian Child Fund representative has shown a ICT presentation in a workshop about the role of ICT in education and teaching technique organized by the Swedish Embassy last week. The CCF presenter indicated that ICT facility in teaching and learning process was motioned drew participating students’ great attention to the technology that help a lot with the improvement of education quality.

As a matter of fact, as I observed in the daily life, my children who use iPad online for learning alphabet and number are smarter and faster than before they did not have it.

To conclude: ICT in education system does not only reduce the drop-out school rate but it also responds to the fourth goal of the Sustainable Development Goals, which focus on improving quality of education and the worldwide net enrolment rate of grade-7-to-grade-9 students is at 49 percent, whereas Cambodia, students have completed at least lower secondary school completion rate was 45{020613e3781e757fa5d0c4ea8d2e9a1eda2b430a524642dc0ce5b56489f01aa8}.  (MoEYS, 2014 /15).

In global economic terms of ICT benefitcery as digitization has the potential to boost productivity, create new jobs, and enhance quality of life. It is estimated that an increase of 10 percent in a country’s digitization score contributes around 0.75 percent growth in GDP per capita in a given year. Despite the poor global economic climate in 2011, for example, digitization was believed to have contributed US$193 billion to global economic output and created 6 million jobs (Sabbagh, et al., 2013).

However, more importantly, the budget allocated to ICT in education system is not enough, despite the 28 percent increase in 2016 compare to that in 2015 (MoEF,2016). The best country to model is that of South Korea, a country which is attempting to eliminate paper-based learning material in all its form and turn to ICT and e-learning instead.