From migrant bride to sex slave in China 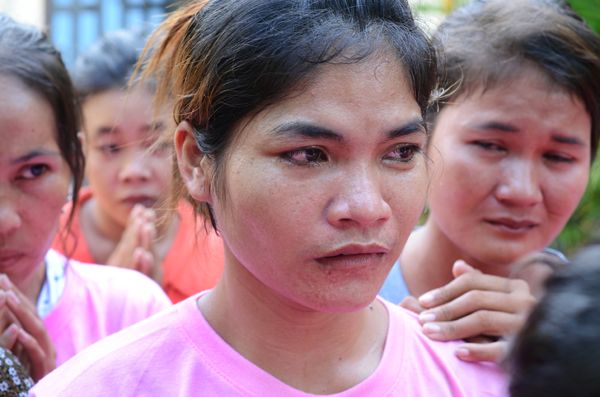 Cambodian women were survived from labor exploitation from Malaysia. The Post

Cambodian Women are sold from one country to another

A few years ago, it happened to only Vietnamese women, especially prostitutes, who were brought away from their homeland to be sold in China. Now, this trend has shifted to Cambodian women after political and economic systems between Cambodia and China are better integrated. The broker (trafficker), taking advantage of this condition, have been using a wide range of methods to trick Cambodian women into being trafficked to China. The trafficking process starts with the broker in Cambodia using a wealthy-looking man to lure the woman to China in the form of marriage. They claim that they will treat her well, buy her a car, give her money to send to her family, and pay for occasional visits to Cambodia. Then they will take photos of her posing with modern and expensive materials. After that, the Chinese broker will bring those photos to Cambodia; find a Khmer broker to be his or her partner, and start disseminating them in rural villages. The Khmer broker uses the Chinese man’s name to persuade the parents into making their daughters marry those Chinese men and move to China in order to be rich like the married woman in the photos. Moreover, the brokers will guarantee all the expenses of preparing the required documents, but the groom is not present in Cambodia; he will pick up the bride at the airport in China.

“One of them felt so happy as if she had been reborn when she saw the photos of Samdach Decho Hun Sen, the Prime Minister of Cambodia, and his wife, Bun Rany, in front of the Consulate. Immediately, she knelt down and bowed to those photos. In contrast to what they had expected, those five women were sent back to their houses by the consulate officials due to them not being in possession of their passports.”

As soon as the parents and the daughter agree on and put their thumb-prints on the wedding contract, they will be given $500 as the bride price. After preparing all the required documents, the brokers will buy a plane ticket for the daughter to leave for China, from the airport in Phnom Penh or Siem Reap. According to a victim, she had to be on her own on the plane, without the brokers, as they do not want to arouse suspicion of their role in human trafficking. When she reaches the destination, one or two of them (the traffickers) are waiting for her at the airport in China. They will bring her to the gathering place, just like a warehouse. Then all the newly arriving women will be seated in rows in a one-way mirrored room, like motorbikes in a garage, waiting to be bought by the customers who seek a wife or mistress. The prices range from over 10 thousand to over 20 thousand dollars, based on the women’s appearances. It is a ten-fold profit for the traffickers, who spend around only more than one thousand to two thousand to buy those women from Cambodia. The customers are not rich; most of them are poor blacksmiths, mountainous loggers, or farmers who want children since Chinese culture emphasizes the importance of carrying on the family name. Some of them saved money for a long time or collected money from their relatives so that they can buy a woman from the “warehouse”.

China, Case I: A Khmer woman was sold to a Chinese logger with epilepsy, who is living with his mother at the foot of a mountain. The mother wants her son to have a son to bear the family name. That man will always force her to have sex with her 5-6 times a night, but she does not refuse because she is afraid that he will beat her. She had to bear the hardship, and dare not to say anything, even when she is sick. To make worse, her husband will also beat her when she still has her period, saying that she has secretly taken abortion pills. No one helps her when she is beaten, not even her mother-in-law. Simply speaking, she is treated as a “baby-making machine”. Until now, she still has no child. She has to live a very miserable life, facing problems over many things such as language and food, and having no right to go anywhere she wants. Her passport was seized; the only thing she has is a phone. She also has to help her husband with his work and with carrying water. When she finds it too hard, she calls her parents to tell them that life in China is so much harder that in Cambodia, but she does not know what to do. Unable to speak any Chinese, she does not know where she should complain. China is a very big country; furthermore, she does not know anyone there. The Cambodian Embassy is in Beijing, and it has only several consulates in some of the provinces. What her parents can do is cry aloud, feeling sorry for their daughter, and not knowing what to do in order to bring their daughter back to Cambodia. In addition, a consulate responsible for a region has no authority to house in its territory a Cambodian citizen from areas not under its jurisdiction.

China, Case II: Similar to Case I, the abuse in this case was caused by Chinese husbands. Two Cambodian women tried to run away from the house at night. One of them still had her passport while the other did not, for her passport was seized. They reached a Cambodian consulate in a Chinese province. The one who had the passport was able to buy herself the plane ticket to come back to Cambodia with the money sent to her by her parents. For the one who did not have the passport, the consulate officials did not pass her the transferring letter for emergency situations, which serves as an alternative to the passport, and sent her back to her to her husband’s house, assuring that she would not be lost. That was because the laws in China require her to file for divorce and completely terminate the bond of marriage with her Chinese husband before she is allowed to return to her country. When she was sent back to that house, she was locked up, her phone seized and abused again. In such conditions, she may die or suffer from psychological trauma.

China, Case III: This is another similar case. Five women escape from their houses from different provinces to the Cambodian Consulate in Shanghai. One of them felt so happy as if she had been reborn when she saw the photos of Samdach Decho Hun Sen, the Prime Minister of Cambodia, and his wife, Bun Rany, in front of the Consulate. Immediately, she knelt down and bowed to those photos. In contrast to what they had expected, those five women were sent back to their houses by the consulate officials due to them not being in possession of their passports. If they had had their passports, they could have bought the plane ticket by themselves, and would not have had to seek assistance from the consulate.

If the laws in China were as such, why did the consulate officials not keep them there and provide them with food and shelter first before deciding what to do next? If they could not do that, why did they not communicate with the IOM (International Organization for Migration) and ask them to prepare the required documents for those women to return to their home country? How could they ignore the pain and misery of these Cambodian women? After becoming diplomats, they have always enjoyed the high pay and living standard in a foreign country, indifferent to the welfare of their compatriots.

There are many related questions over this issue. How do some of victims, who do not have I.D cards yet, get passports so easily? Moreover, some parents do not experience financial problems, but they are greedy, and they want to be richer so that they could seem better-off than anyone in the village, without knowing that their daughter will be sold. Therefore, it is very important for those who have daughters to be careful and not believe the lies and persuasion of the broker or trafficker who come to your villages. Please be aware that for the price they pay us, Chinese traffickers are profiting from this transaction. After she gives birth to a child, the woman could be sold again to the others with only a little loss in price. Meanwhile, the anti-human trafficking authorities should also know Chinese in order to intervene in time. In conclusion, the government should reconsider this issue, and the fact that diplomats and consulate officials in China have not expressed any sympathy for Cambodian women who have been trafficked and have become sex slaves.